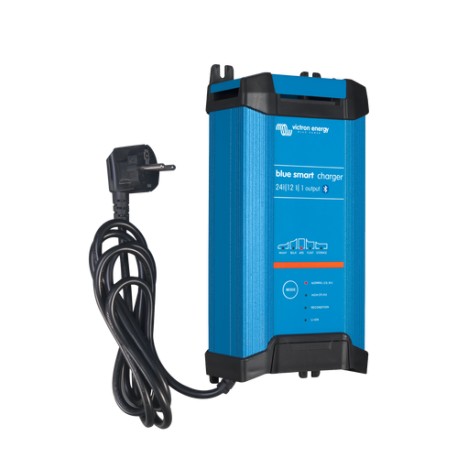 The wireless solution to monitor voltage and current, to change settings and to update the charger when new features become available.

The Blue Smart Charger features a microprocessor controlled ‘adaptive’ battery management. The adaptive feature will automatically optimize the charging process relative to the way the battery is being used.

Absorption, Float and Storage voltages as well as the Recondition setting and the temperature compensation value can be programmed with the Bluetooth app. After enabling the Expert mode, the app allows changing practically all parameters and time limits used by the charge algorithm.

Storage Mode: less maintenance and aging when the battery is not in use

The storage mode kicks in whenever the battery has not been subjected to discharge for 24 hours. In the storage mode float voltage is reduced to 2,2 V/cell (13,2 V for a 12 V battery) to minimize gassing and corrosion of the positive plates. Once a week the voltage is raised back to the absorption level to ‘equalize’ the battery. This feature prevents stratification of the electrolyte and sulfation, which are major causes of early battery failure.

Will initiate charging even if the battery has been discharged to zero volts. Will reconnect to a fully discharged Li-ion battery with internal disconnect function.

When in NIGHT or LOW mode, the output current is reduced to max. 50 % of the nominal output and the charger will be totally noiseless. The NIGHT mode automatically ends after 8 hours. The LOW mode can be ended manually.

Output current will reduce as temperature increases up to 50 °C, but the Blue Smart Charger will not fail

The history screen contains historical usage data over the charger’s lifetime and detailed statistics for the last 40 charge cycles.

Synchronize up to ten battery chargers in a VE.Smart network to make them charge a battery as if they were one large charger. The chargers will synchronize the charge algorithm between them. They will simultaneously switch from one charge state to another, for example from bulk to absorption.
Synchronized parallel charging has several interesting advantages:
- Redundancy: if one charger stops for whatever reason, the other chargers will continue to operate.
- Flexibility: simply add a charger to the network if more current is needed.
- Cost: several low power chargers will in general cost less than one high power charger.
- Installation: several low power chargers may be easier to fit in a confined space.